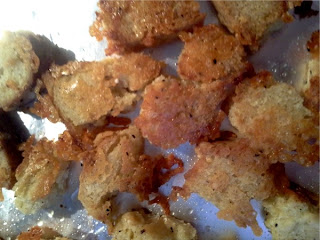 I've been on a low-carb kick again, because I had good success with it before, and for Bob's sake, I could stand to lose a stone or 10...  I slipped up with the carbs over the holidays and during a recent visit to the UK, and boy did I reap what I sowed...re-gained weight, osteoarthritis pain went into overdrive...felt bloody miserable.  So, I decided it was time to bid the carbs adieu again (mostly - I still eat low-glycemic veggies), because I'm getting too old to feel so old...Wait - what?....

Anyway, a few weeks ago, friend (and outstanding artist) Brigid Ashwood recommended Julian Bakery's Paleo Bread (Coconut) on her Facebook Page as a suitable alternative to naughty, carb-y bread, and since I value her opinion on matters of the palate (she's posted several wines that are lovely, and she's a fantastic cook), I decided I'd give it a try.  I did, and I found it to be....meh.  It's a bit too chewy for my liking and has a funny, chemical-y after taste (I tried it as toast, since morning toast drowning in butter is one of the things I miss most about low-carb living).  I got to thinking (because that shit's expensive and I didn't want to waste it) and it occurred to me that making it with something with a strong flavour might help to hide that funny after taste, and that perhaps baking it would make it more toasty.  I LOVE Panera Bread's Asiago croutons (as found in their Chicken Caesar Salad), so I decided to try to make something similar.  I used a Parmesan-Asiago-Romano blend, and I am very pleased with the results.  Here, then, is my recipe:

Paleo Bread (I used Julian Bakery's Paleo Bread-Coconut)
Butter (to taste, but enough to coat bread - I used about 2 tbsps for 3 slices of bread - olive oil would probably work well, too)
Garlic Powder (to taste)
Pepper (to taste)
Cheese (I used about 1/4 cup of Parmesan-Asiago-Romano blend)

Heat oven to 350 degrees.  In a saucepan, melt butter with garlic powder and pepper.  Cut or tear bread into cubes and place in a medium bowl.  Pour the melted butter mixture over the bread, and toss to evenly coat.  Add cheese and toss again.  Place on a baking sheet (I recommend lining it with a sheet of non-stick aluminium foil for ease of turning, and clean-up) in a single layer, making sure each bit of bread has some cheese attached.  Bake for about 10 minutes (ovens differ, so YMMV).  Paleo bread does not toast quite like regular bread, so after 10 minutes, I recommend flipping the bits over and baking for an additional 3-5 minutes.  Remove from oven, allow to cool, and eat 'em!

(ETA: This is several servings...depending on how you use them.  I had a handful as a snack, and have plenty left over for salads or more snackage!)


Posted by MaryHerself at 4:41 PM No comments: