Who's the most famous person you've met?

Ask, as askingly as you can, an ask:

Posted by MaryHerself at 11:46 PM No comments: Hello everyone!  The newest artwork is an original watercolour that I am auctioning via eBay called "Raven's Key"  100% of the proceeds of the sale of this artwork will benefit NF, Inc. an organization dedicated to providing support to individuals and families affected by Neurofibromatasis.  This auction is inspired by NF Inc.'s Doodle Day.

The painting is 6" x 4" on Arches Hot Press Watercolour Paper and is signed on the back (initialed on front) and the Raven was inspired by the character "Matthew" in Neil Gaiman's Sandman.

Prints and cards will be available once the auction is completed and my web site updated!
Auction Link: "Raven's Key" Charity auction on eBay

Email ThisBlogThis!Share to TwitterShare to FacebookShare to Pinterest
Labels: art, auction, bird, charity, key, Matthew's got the key but which key is it?, raven

As you may be aware, Luna Grove Designs and Blue Moon Atelier were meant to be on Spring Break between the 7th of April and today, the 21st of April, however, we are having to extend our closing time due to the Icelandic volcano ash cloud covering most of Europe and shutting down airspace.  We are currently still stuck in the UK and the earliest available flight back to the States is next Tuesday, the 27th, which means shipping of orders will be delayed until late next week at the earliest.  We are very sorry for the inconvenience and thank you for your patience and understanding.  Any further updates will be posted to this site.
Posted by MaryHerself at 5:28 AM No comments:

I thought I'd post a little update about the new Second Life shop.  I've finished the shop at Caledon Cape Wrath and loaded it up with goodies (including a table of cool freebies).  Here's a look at the front and back of the shop: 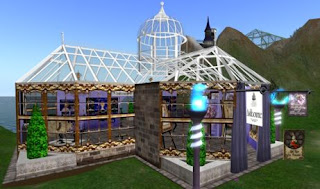 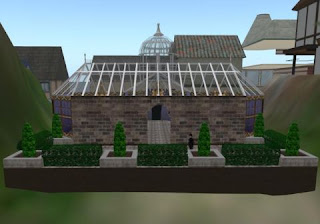 And, this is the most recent creation - Valentine's Day themed (if a little 'goth' tinged), "Bleeding Hearts" Tiara and Earrings (the tiara is L$150, the earrings are free!): 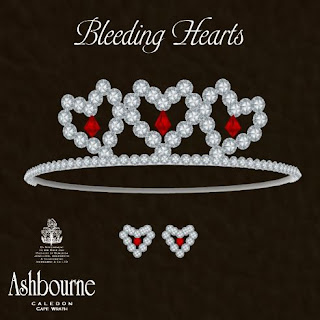 Posted by MaryHerself at 11:41 AM No comments:

If you've not already seen Torchwood "Children of Earth" and are planning to, and don't want to be spoiled, you may want to skip this post.  I'll try to keep the spoilage to a minimum, and give notice when I'm about to spill one, but you have been warned! Yes, I'm come a bit late to the table - we don't have BBC America and had to wait for the DVD.

My husband and I started watching "Children of Earth" thinking that it wasn't quite a new series of the show, but expecting it to be a special 'in-between' sort of thing - something to keep us all hooked until the next proper series.  At the end of it, the impression we were left with was that the producers really wanted to end the whole show, and since they can't kill off the lead character, they decided to make him as unappealing as possible, so that no one would really mind if they never saw him again.  I mean, there's 'warts and all' and then there's Terminally Fatal Character Flaw.  The producers of Torchwood crossed that line with the treatment of Captain Jack Harkness in the finale of "Children of Earth".

We're used to finding out unsavoury things about Captain Jack's past.  Let's face it, Jack wasn't a 'nice guy'.  But, after all his adventures with The Doctor, and given his tenure with Torchwood, by the time Gwen Cooper joins the team, our Jack seems to be growing a soul.  He's not perfect - he never was, and never will be - but he seems to have acquired a properly functioning moral compass for the most part.  He's learned he can get what he wants without resorting to some of the habits of his past, and that approaching things with this new attitude often has more rewards than would have been gained had he fallen back on old tricks.  During the previous two seasons, he's been tested and tempted plenty, but still managed to resist returning to full-on scoundrel ways.  And, we've loved him for it.  We want him to be the hero, and we expect there will be a price to pay.  We expect he's still going to have to make some hard decisions and hurt those he loves (and who love him) along the way, but we expect that all this is done with the greater good in mind, and we expect there are certain lines that will not be crossed, or he will turn out to be no better than those he's charged with protecting us against.

"Children of Earth" unfolds over 5 episodes, or 'days', but I won't do synopses of each day here.  As I said to my husband after we'd finished watching: 'It started so strongly, but ended so wrongly'.  A quick look at IMDb shows that John Fay wrote episodes 2 and 4, James Moran penned episode 3, and series creator Russell T Davies wrote episodes 1 and 5.  Now, to be honest, most of my least-favourite Dr Who episodes were penned by Davies.  However, I have enjoyed his writing for the most part on Torchwood.  Episode 1 of "Children of Earth" was exemplary, the middle three - wonderful.  Episode 5 - not so much.  As the story of Day 5 progressed it seemed to get even more and more far-fetched in places, characterizations were all over the place, and it just didn't seem to have the flow of the previous episodes in the tale.  And then, there was the denouement - the moment when our hero, Captain Jack - the only man who CAN save the world, steps up and, yes, saves the world.  Only, the way he did it meant that we could likely never find a redeeming characteristic in him no matter how much we wanted to.

I think my husband put it best when he said, ' I'm not a writer, but - you don't have your hero kill his own grandson'.  Oh, sure, it was an act of desperation to save an otherwise doomed planet, but it seemed to come a bit too easily.  Had all other options REALLY been exhausted? Oh for the days of old, when Owen would have quickly whipped out a syringe, sucked some adolescent DNA into it, made some alterations in the make-shift lab, and injected the DNA into Jack so that he could stand in as the conduit to the 456 to carry the sonic wave that would destroy them. What was the point in discovering that bit of creative, temporary DNA swapping in a previous episode if you weren't going to use it when it was really necessary?  Even Jack's initial protest of the prospect of using (and killing) his own grandson was about as convincing as Willy Wonka's 'Stop - Don't - Come back' admonitions to the naughty kids in the Chocolate Factory.

I give kudos to the wonderful John Barrowman for making the most of the material he was given, and I lay the fault of the ending at the writer's feet.  Honestly, is that the only way it could have gone down?  I think perhaps there was too much focus on other business within the story and way too little on the ending.  It actually COULD have worked, had it been better written.  We weren't given sufficient evidence that absolutely no other solution was possible, and there was not enough of a sense that Jack was even interested in trying anything else.  The fact that he gave in too easily robbed the character of all the appeal he'd gained over the previous episodes of Torchwood and Dr Who.  *This* is the Face of Boe? Angels and ministers of grace defend us!
Posted by MaryHerself at 12:58 PM No comments:

Email ThisBlogThis!Share to TwitterShare to FacebookShare to Pinterest
Labels: BBC, Captain Jack Harkness, Torchwood, who's idea was that?

I thought I'd post a quick Second Life update.  I've been only on sporadically over the last several months, but will be back to hanging out and building more now that the holiday rush is over!

Currently, I'm working on building a new shop in a new location, as the landlady of my current shop has announced that the area will be closing soon.  I've enjoyed my stay there, and the area was beautifully developed and a nice fit for my art and builds, but I am also excited to be moving now to a Caledon sim - Cape Wrath, specifically.  I've managed to snag a parcel on the water, and it will become the main location for my Second Life presence "Blue Moon Grove".  Here is a progress shot of the shop I am building: 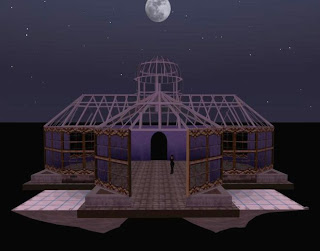 That little blip inside is my SL alter ego. ;)  The textures are a combination of SL-provided basic textures, textures I've created, and textures I've purchased from other in-world builders.  Specifically, the brass-framed windows across the front are favourites of mine - they were created by a skilled builder, and great real-life artist, my friend Brigid Ashwood, who is known as Brigid Yoshikawa in-world and who collaborates with another skilled builder, Dagny Mannonen (who prefers to remain anonymous in real-life).
I have some new ideas for additions to our Second Life jewellery line (Ashbourne & Co. Ltd), and am getting together with my design partner, Gryffyn Ashbourne, this week to plan.
Don't worry - I'm still working on some real life art!
Posted by MaryHerself at 10:37 AM No comments: