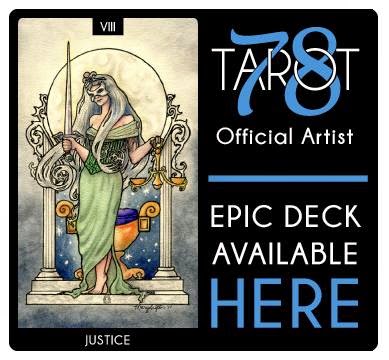 After a highly successful KickStarter campaign, the 78 Tarot team is now preparing to publish our deck!  If you missed out on the KickStarter, it's not too late to reserve a deck.  For a limited time, you can pop along to the Etsy store (linked above) and pre-order a deck.  It is expected that the decks will be ready for shipping later this year in Autumn - and should be delivered well before Yule and Christmas!

I am so chuffed to have been part of this project!  This whole thing has gone over so well and garnered enough attention that the team have decided to do a 2nd deck!  The theme of the next deck will be voted on by the KickStarter supporters of the first deck, and there will be some new artists and some familiar artists involved.

If you are coming to FaerieCon, I hope to have a limited number of these 1st edition decks available (they will include the 1st edition extra wild cards - which won't be available in subsequent printings of the deck).  In the meantime, you can visit the 78 Tarot Official Site and Facebook Page to keep up with all the latest developments!
Posted by MaryHerself at 3:33 PM No comments: